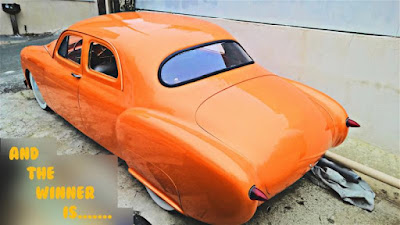 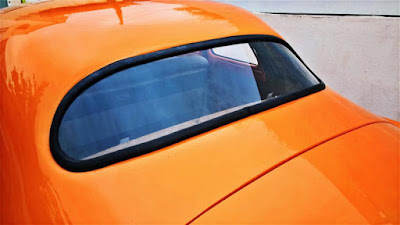 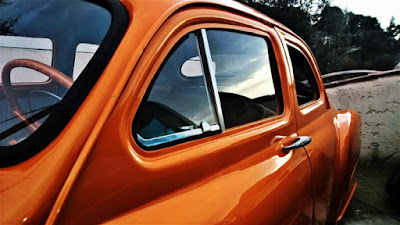 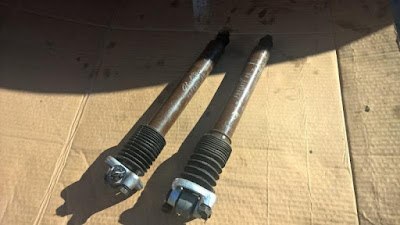 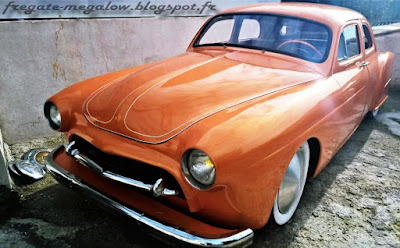 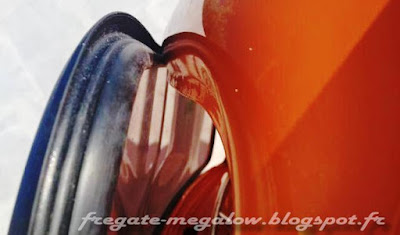 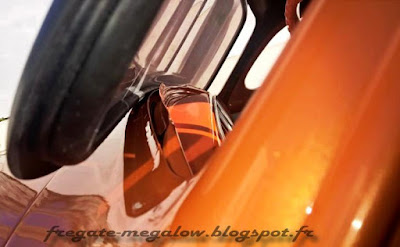 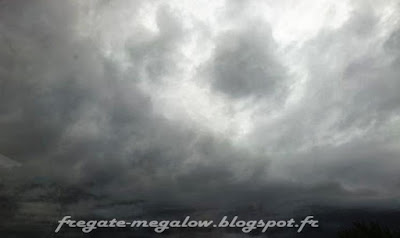 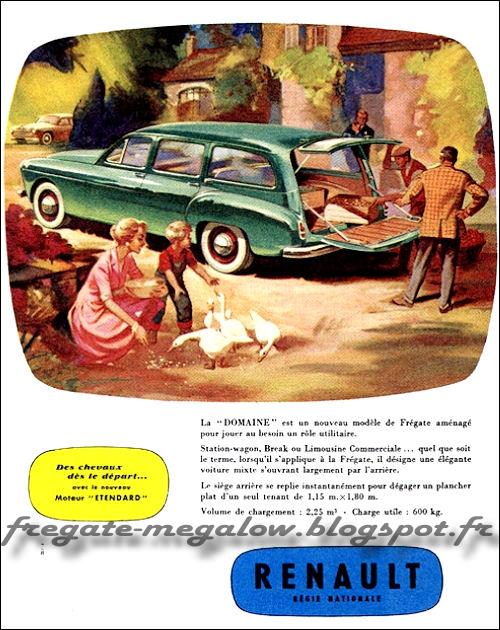 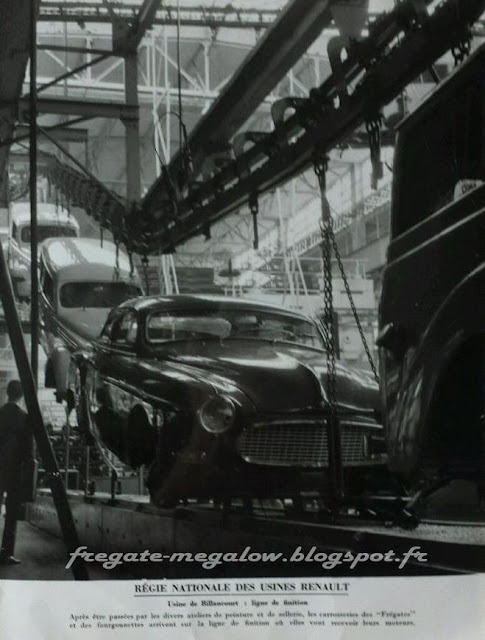 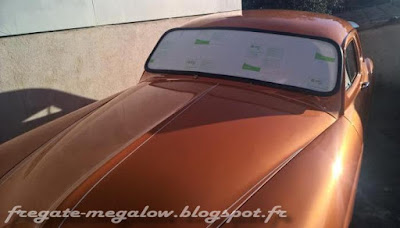 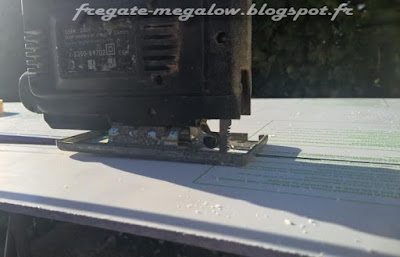 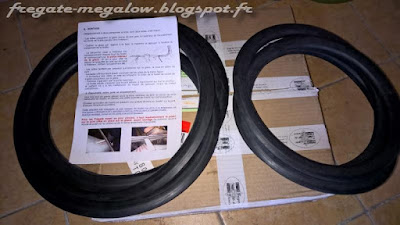 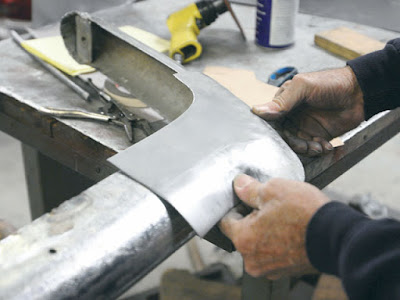 Another trial fit finds it's getting close. Marcel knows that fitting the new bumper to the outside of the old bumper will not yield a clone of the original, but the customer wanted something that looked close and would fit, which is what he'll get. 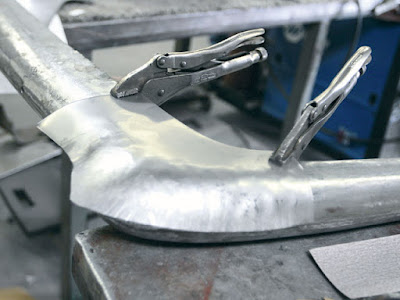 The machines and tree stump can only do so much-extreme shaping is done with hammer and torch, so the section is first clamped in place. 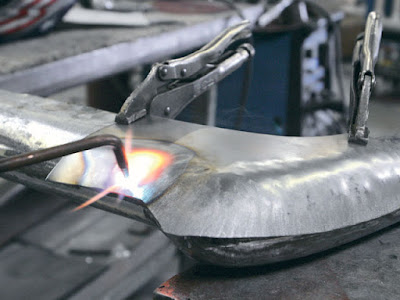 The corner is first heated with a torch flame to white-hot, and the now-pliable metal is formed against the old bumper with a large hammer. 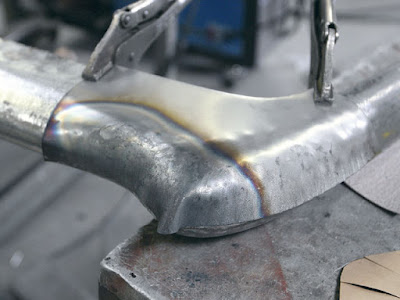 After being slapped and hammered to fit the old bumper, there is a little extra material hanging over both the top and bottom of the new piece. 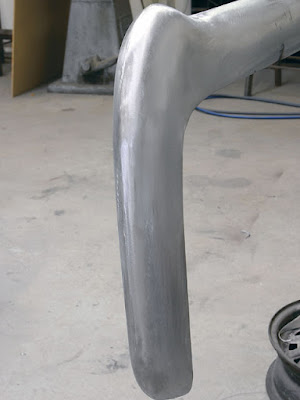 after it had been run through the Eckhold Piccolo machine. 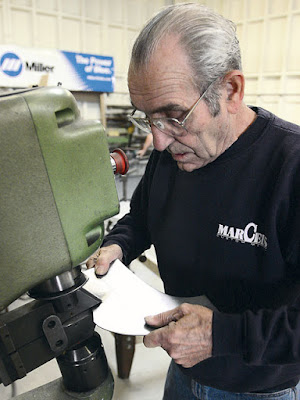 Marcel works the metal through the Piccolo machine so it starts to bend and shape the corner of the bumper. 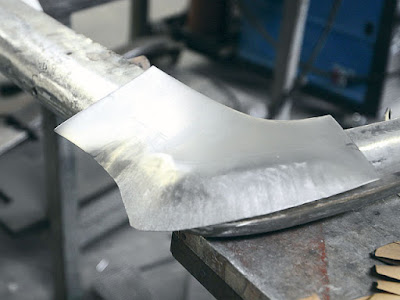 After a few passes, the section is checked for fit on top of the old bumper. 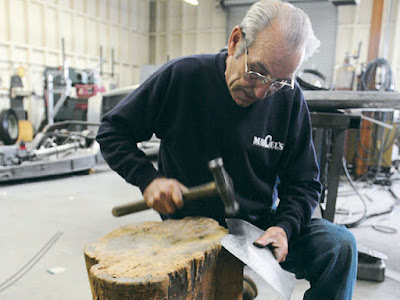 A little bit of ol' fashioned hammer-to-tree-stump moves the metal into shape faster than the Piccolo can.

Custom Bumper Building - Building a Bumper
Marcel Shows How It's Done
Custom Rodder, October 12, 2006
Today's top customs and street rods arguably wear more scratch-built parts than ever. From custom frames to hand-hammered bodies, many go beyond the realm of mere "customs" or "rods" to become handcrafted, coachbuilt creations.
Nowhere is this level of craftsmanship more apparent than in the competition for the top two indoor car show awards-the Don Ridler Memorial Award at the Detroit Autorama, and the America's Most Beautiful Roadster award at the Grand National Roadster Show. These honors are given to the owners of the finest vehicles, but are actually earned by the talented craftsmen who design and build the cars. Only a few names repeatedly come up in build credits for Ridler and AMBR winners; Marcel DeLey's has probably been the most frequent in the past decade.
Marcel works out of his Custom Metal Shaping business in Corona, California, with his two sons, Marc and Luc. They specialize in scratch-building fenders, hoods, and entire bodies, and then turn their raw-metal creations over to the build teams that finish them. To date, the DeLeys have built three Ridler winners (2002, 2003, and Ken Reister's 2005 winner, Impression), six AMBR winners (1996, 1999, 2000, 2001, 2003, and 2006), plus many other well-known vehicles.
For all the high-profile cars they build, the DeLeys themselves are pretty low profile. This might be the first time you've read about them, as some builders like to keep their "ace-in-the-hole" craftsmen a secret. When we visited the shop recently, Marcel was starting on a small project: recreating a bumper from a rare vintage car. We're not going to tell you what the bumper is for until the end of this story because, quite frankly, it doesn't matter. What does matter is the process, and we thought some of you budding fabricators would like to see how it was done. Maybe you can even give it the ol' college try and use similar techniques to build a custom bumper-or grille, or whatever-on one of your next projects. Follow along and see how a master does it. 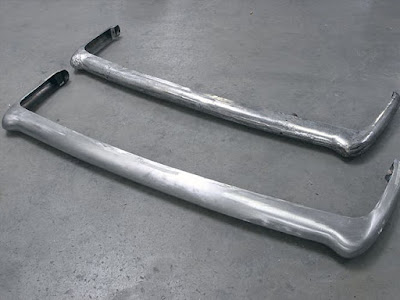 Marcel's Custom Metal Shaping used the original bumper in the background as a model for fabricating the new one in the foreground. The new bumper is not an exact clone, but a very faithful copy of one that would be nearly impossible to find elsewhere. The same build methods they employed can be used to make custom bumpers, grille bars, or other parts for nearly any project. Let's see how they did it. 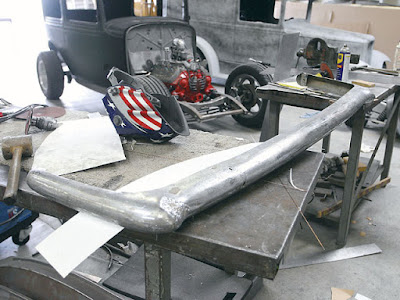 Here's what Marcel started with. This vintage bumper was full of pits and had been crunched a few times and poorly straightened. This damage and its age made it too brittle to repair, but Marcel used it as a model/buck to create a new bumper. 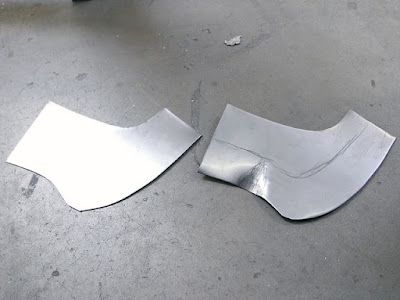 Most round pieces used on a project start with paper templates, cut to the shape of the piece to be copied. Those shapes are then transferred to 16-gauge commercial grade steel sheet and trimmed a little oversized with hand shears (you'll see why later). The piece on the right is the top right corner section of the new bumper...